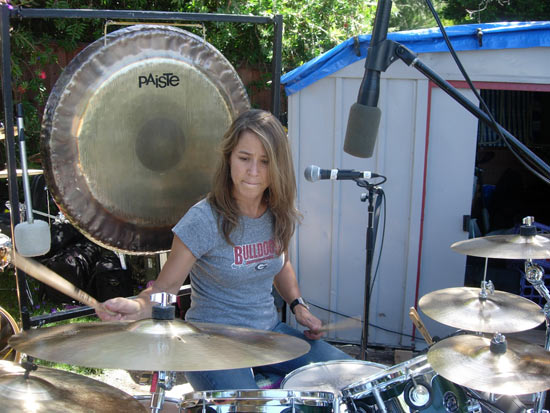 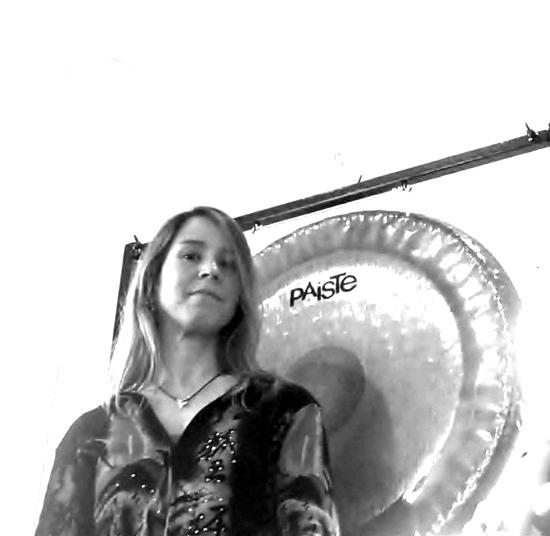 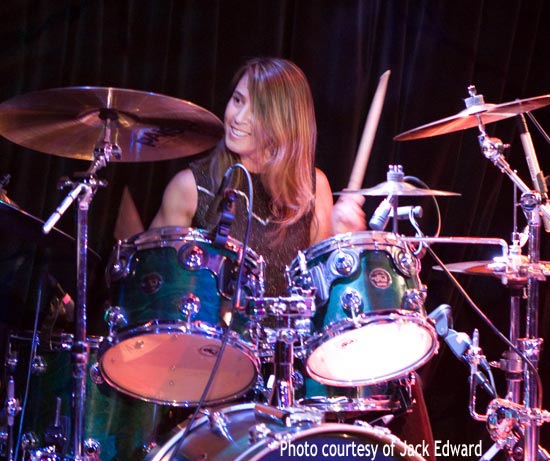 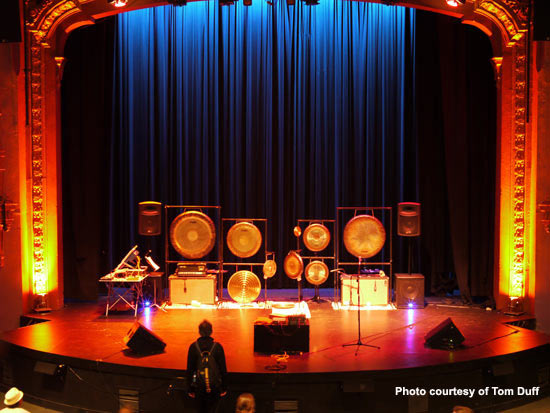 Drummer/percussionist Karen Stackpole began her career as a rock drummer in the late ‘80s, playing with numerous bands between the Monterey and San Francisco Bay areas and touring up and down the west coast. Over the years she branched out, exploring blues, alterna-country, funk, jazz, and progressive rock as well as foraying into experimental music and alternative metal. Recent endeavors include drumming with Malcolm Mooney and the Tenth Planet, the Francis Wong Unit, and singer/songwriter Audrey Howard.

In the early ‘90s she became fascinated with improvised music and multi-media collaboration. She started joining forces with SF Bay Area musicians, playing new music and stretching beyond established boundaries as well as working with dancers and experimental film. At a Percussive Arts Society International Convention in 1991 she was exposed to the wonder of Paiste gongs and immediately altered her trajectory to include these incredibly versatile instruments into her musical vocabulary. She began to delve deeper into all aspects of the gong.

After years of communing with well-rendered Paiste alloys, she specializes in gongs and soundscapes in particular. In her explorations of metals, she has cultivated some distinctive techniques for drawing harmonics out of tam tams with various implements: rubber mallets, felt and yarn mallets, ball chains, bass and cello bows, kitchen utensils, and other small objects. Karen has also contributed gong sounds to more conventional musical styles in the genres of rock, jazz, classical, prog, psychedelic, cabaret, and blues.

She is active in the San Francisco Bay Area and Los Angeles creative music scenes and has participated in music festivals and performed solo in Seattle, Los Angeles, Baltimore, Chicago, and the Bay Area as well as collaborating with other gongists from the UK, Poland, and the US. Over the years she has played with Gino Robair, John Schott, Vinny Golia, Myles Boisen, Moe Staiano, Chris Heenan, Rod Poole, Steve Roden, Dean Santomieri, Le Quan Ninh, Francis Wong, and others. In addition to solo work, she currently performs and records with various projects including Sabbaticus Rex, Ghost in the House, the Bay Area Chamber Symphony, gongs/metals duo Euphonics, the improvising quartet Vorticella, and most recently in a duo with electronics master, Die Elektrischen.

Metalwork – Music for Gongs was her first solo effort released in 2000 on Limited Sedition. Her latest album on Dielectric Records with Die Elektrischen, Machine Shop, features gong improvisations, sometimes played against loops and soundscapes created from self-generated sonic material, tastefully affected with masterful processing by a wizard of the craft. Other solo and collaborative releases are out on Dielectric Records, Limited Sedition, Hypnos, and Pax Recording. Her music has been described as “gorgeous and thick, noisy and hypnotic, drony and transcendental” by Aquarius Records, SF. In 2009 her gong sounds were featured on a motion picture soundtrack for an independent full-length horror film entitled Seventh Moon.

In addition to musical pursuits with gongs, Karen has also collaborated with sound healers, working with people with autism as well administering “gong baths” and delving into the transcendental aspects of the gong. She teaches drumming, gonging, and audio engineering and contributes regularly to DRUM! and Electronic Musician magazines and has also written for Onstage and Traps magazines. Ever since discovering the depth of Paiste cymbals, sounds, and gongs in 1991, Karen has played Paiste metals.